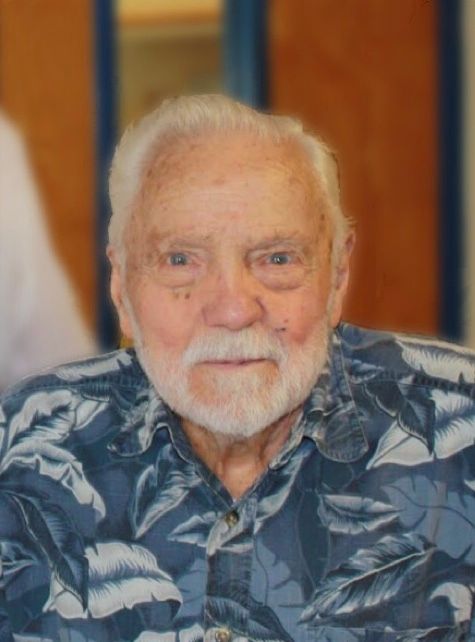 On Thursday, January 3, 2019, Spencer M. Bennion, the last living member of the South High School "Math Meeting" poker club, turned out the lights and went to join his friends and family on the other side.

Born in Taylorsville, Utah, on September 11, 1922, he was the son of Ira Wainwright and Ellen S. (nee Mackay) Bennion. He was the grandson of pioneers from Wales who settled in Utah in the 1840's.

Spencer overcame much adversity in his life, including the loss of his father at age 7 and a childhood illness that required a two-year stay at Primary Children's Hospital.
He grew up in Taylorsville, Utah, herding cows, hauling hay, and raising sheep as part of 4-H. He rode a horse-drawn wagon to elementary school.

At the age of 20, Spencer joined the U.S. Army. He served in the 1st Infantry Division from 1942 to 1945 in the European-African Middle Eastern Campaign in Sicily, Normandy, Northern France, Ardennes, Rhineland, and Central Europe. The Army awarded him the Bronze Star Medal for bravery, along with the Bronze Arrowhead and a Presidential Unit Citation. He was thrilled to have traversed the Strait of Gibraltar a number of times and, though he seldom spoke of his wartime experiences, he always held his admiration for his 1st Infantry comrades close to his heart. His experience with one brave young soldier who died during the Battle of the Bulge taught him not to judge others by their appearances, but by their ability to rise to the occasion and fulfill their God-given potential.

Spencer was a graduate of Granite High School in Salt Lake City and received his B.S., Master's, and EdD from the University of Utah. He was a high school teacher and administrator in the Salt Lake City School District for 30 years prior to his retirement. He believed strongly in equal opportunity and was an early participant in the Civil Rights Movement. In 1972, he was named Utah's Most Outstanding Educator at a state-wide NAACP convention. He was an advocate for all students, including those who had disabilities, and earnestly urged young people to make the most of their opportunities. He took great pleasure in the successes of former students.

For 10 summers, during school breaks, he worked with the U.S. Forest Service in Brighton, Utah, where he fought forest and range fires. Never leaving his rural roots behind him, he raised Arabian horses and Suffolk sheep.

In retirement, Spencer loved to be outside, tending a garden and orchard, taking care of his sheep, reading the Wall Street Journal on the patio, and traveling throughout the West. He loved to drink coffee at any time of the day and never said no to ice cream.
Spencer had a deeply rooted attachment to the mountains, sage brush, wildlife, and history of the West. But at 76, he moved to Pennsylvania with his wife, Karen, to live near his daughter, Allison, son-in-law, Earl, and granddaughters. He embraced this new phase of life as a doting grandpa who took care of bus stop pick-ups, acted in videos for school projects, played t-ball, and shared many an after-school snack. He enjoyed learning the history of his new surroundings and loved his wood stove, chopping his own wood until he was 92.

Even as his health and memories were failing, he remained concerned that all young people should have a fair chance to receive an education, and he urged those he met to make the most of their educational options.

He is the beloved husband of Karen B. (nee Button) Bennion, and the devoted father of Allison B. Uehling and her husband Earl of Springfield Township, Pennsylvania. He is the fiercely loving grandfather of Jennifer, Abigail, and Caroline Uehling. In addition, he is survived by Karen and Spencer's wonderful extended family. He was preceded in death by his siblings, Stephen, Beth, Lyle, Halvor, Valois, Preston, June and Norma, and by his son, Shane W. Bennion.

Relatives and friends are invited to call on Saturday, January 12, 2019 from 9:30 to 10:30 AM at Christ's Lutheran Church, 700 Pennsylvania Ave. Oreland. His Memorial Service will be held at 10:30 AM, with the Rev. William Vanderslice officiating.

In lieu of flowers, the family suggests anonymous acts of kindness or a donation to a charity of your choice in Spencer's memory.

Dear Family of Spence Bennion. I was so saddened to hear of the passing of Spence. What an incredibly accomplished life he led- a true member of The Greatest Generation! Spence was an Army Veteran & life-long educator like my father, Hal Hardcastle. They were good friends and I fondly remember all the deer hunts dad, Spence, and all their buddies went on when I was a young boy. On one of those hunts, I recall learning of his military service during WWII. I also recall learning from those men about selfless service, integrity, loyalty, conservation of our environment, what it meant to be a man, and the importance of good friends. Those of us that were mentored by people like Spence and his generation were truly blessed. Rest in Peace.
Brett Hardcastle, SLC, UT

Dear Karen, Allison,Jennifer, Abigail and Caroline. I was saddened to read of your loss of a husband, father and grandfather in the S.L. Tribune. It sounded as though Bill had long, happy and eventful life. that is a positive

I loved being around Billy. He was intelligent & funny. Utah lost a good soul when he left. Condolences to the family.

I didn't have the pleasure of meeting Mr. Bennion, but what a moving life-story he had. The grandson of pioneers, who raised sheep, herded cattle, hauled hay and even chopped wood into his 90s was a pioneer himself in fighting for freedom and championing civil rights & the rights of the disabled. May his good works and love of others be an example to all of us.

Dear Karen and family, I am so sorry to read of your loss. I'm sure words do little to ease your loss, but know that we are thinking of you at this hard time. We love you!

The attached photos are added to the memorial of Spencer Mackay Bennion to help share their legacy.

Thank you for sharing your memory of Spencer