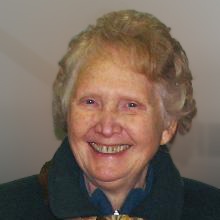 Raised on a farm in Winona, Minnesota, Sister Jane entered the Medical Mission Sisters (MMS) in 1953. A trained nurse, she began her medical career at Holy Family Hospital (HFH) in Atlanta, joining the staff for the facility's opening in 1964. HFH was the first integrated hospital in the city.

Reflecting on her time at HFH, Sister Jane said, "It was our desire to serve all who came for medical care and healing. It was a very difficult work. However, it also brought a richness and blessing into my life--opening me to the profound difference in culture and race and finding a path into love and acceptance of all. Sisters and staff and physicians, all working together in this interracial setting forging working relationships and friendships."

After earning a master's degree in counseling from Georgia State University in 1973, Sister Jane served as superintendent of the Georgia Reception for Women before returning to her Society's North American headquarters in Philadelphia, where she co-directed a Contemplative Center in center city from 1982-86. Sister Jane was passionate about caring for the Earth and in 1985 helped establish "Earthlings," a project dedicated to education and events around ecology and the environment. Until 1998, she also directed her Community's Lifewright Office that promotes the renewal, continuing education and transition for MMS in North America, in addition to serving as liturgy and chapel coordinator. Sister Jane was trained as a spiritual director; an Associate recently shared that many Sisters and Associates had their spiritual lives nurtured by Sister Jane.

Sister Jane wrote, "If I am given this grace of attentive presence, then the other shares his or her sacred stories, of prayer, of challenge, of hard times, of new ideas, of grace, of blessing. Cultivating attentive presence also opens my heart and mind to listen to the deeper meanings of what is being shared. If I fail to widen my heart, I miss the real discernment that might be needed to assist another to open the mind, the heart and the eyes to the path that the Spirit might be leading or working in the life of the one who comes for companioning and direction."

Insightful, intuitive, universally kind and creative is how Sister Jane is remembered. She was known to gather a group of Sisters for an impromptu evening of singing, to make up delicious recipes using her instincts instead of a measuring cup, and she prolifically wrote "heart prayers" that her Community compiled into a book. Sister Jane, who recorded songs with Sister Miriam Therese Winter, continued to sing, even when she lost her ability to talk as her health declined. She lived in St. John Neumann Home from 2012 until the time of her passing. She was well-loved by many and will be deeply missed.

The attached photos are added to the memorial of Jane Pellowski, M.M.S. to help share their legacy.

Thank you for sharing your memory of Jane