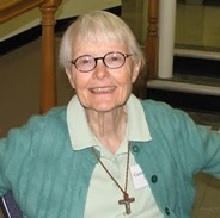 Sister Gertrude Provost was born in Hibbing, Minnesota on March 8, 1928 to Peter Patrick Provost, the son of a French Canadian, and Anna Pfeffer Provost whose family came from Austria.

Gertrude was the fourth of seven children. She grew up on a northern Wisconsin farm and belonged to St. Anne's Church in Sanborn, Wisconsin. Her pastor wrote this reference for her when she applied to the Society. "Gertrude in my opinion is a girl of A-1 character and I feel a very good candidate for the sisterhood. She is talented and has a very pleasing personality. All in all I feel she will be admirably suited for the religious life and a credit to your order if she is accepted." History proved, that man knew what he was talking about. She went to public schools and was valedictorian at her high school graduation. She put herself through 3 years of college at the Stout Institute in Menomenie Wisconsin by doing general housekeeping and caring for children. Near the end of her third year she applied for entrance to the Society. She gave as her reason for applying to religious life, "I love God and wish to make others know and love Him. I hope to do so through serving Him within a religious group, preferably missionary." She was accepted and entered SCMM on February 14, 1950. In the Novitiate she was put in charge of the kitchen. She made first vows on August 15, 1952 in Philadelphia. From 1954-1957 she was sent to the University of San Francisco where she obtained an RN degree at St. Mary's School of Nursing and a BSN from the University. In October of that year, after making her final vows, she sailed for Dacca, Pakistan to begin her new mission assignment. She did general nursing until 1959 when she was put in charge of the School of Nursing for a year. By 1960 she had earned her degree as a Registered Midwife in Pakistan. By September of 1960 she was reassigned for further studies in Rome at Regina Mundi.

From 1961 to 1964 she was assigned to the new mission starting in Amman, Jordan and was appointed Director of the School of Nursing. That was a challenging time, but one in which she experienced international community and gained new skills and insights. In 1964 she came back to the USA for renewal. In 1965 she was sent to South Shields, England as Novice Mistress for a year. Then she returned to Jordan and became the local superior. In 1967 she was a Chapter representative. Then in 1970 the Society decided not to renew the MMS contract with the hospital.

From 1970-1973 Gertrude was assigned to HFH Rawalpindi in West Pakistan as Director of the Nursing School. There she gained experience from conducting government examinations, meeting with matrons and tutors from other hospitals in the Punjab and with Ministry of Health personnel. She was asked to help with the revision of the nursing syllabus for the Punjab Province. She learned Urdu to deal with hospital staff and external problems as well. She advocated for her students, developed a student government/forum for the students to appreciate their own importance, and almost doubled the enrollment at HFH within 3 years. She also became involved in the Public Health Sector to meet the needs of the people beyond what the hospital could provide. These were the turbulent years of the war between India and Pakistan. And in the end Gertrude was one of the last two MMS left to turn over the hospital.

1974-77 were spent in London and South Shields taking a post-graduate course in international nursing issues. She also joined a team giving retreats to children aimed at developing their spiritual lives and widening their vision of the world and the place of the Church in it. She was elected a district representative to the assembly of Sector Europe. She loved the experience of international community that she experienced there.
From 1977-83 Gertrude was again assigned to Pakistan, this time to St. Theresa's Hospital in Mirpurkhas, to take over as Formation Directress, teach midwifery classes, and do village outreach work among the very poor. She visited MMS Formation houses in North and South India as a participant in the Asian-East Asian formation meeting.

In 1983 she came home on furlough. Gertrude asked to stay in Sector North America because of her family's need for help in caring for her elderly parents. She served as ANA representative for 6 years during the 11 years she cared for her parents. There she also engaged in home health work and chaplaincy work at the local hospital for which she did a course of study; and she was part of the parish RCIA and CCD programs and communion ministry. She said it was a time of reentering into her family and sharing in their joys and challenges. Her father died first, and after her mother died in 1994, she made a renewal in the Western District. She then returned in 1995 to Pakistan. By February of 1998 she had to return to USA for good due to health issues.
After furlough she joined the House 5 community and within a year was elected the house coordinator. For about 10 years Gertrude joined a team of Sisters who were presenting a self-awareness program to the women at Interim House which is a transition house for women recently released from prison. Gradually she let that go and continued to look after our Sisters in Shalom. When that became too much for her, she turned over house coordination to Sister Vera. In recent years she has been a peaceful presence in House 5, still welcoming everyone who visits.

In October of 2019 she was moved to the Philadelphia Protestant Home on hospice care. Since then her very slow but steady decline continued until January 21,,2020 when she quietly, peacefully, somewhat suddenly went home to God.

Relatives and friends are invited to call on Tuesday February 4, 2020 after 9:00 AM at the Medical Mission Sisters Chapel, 8400 Pine Road Philadelphia, PA 19111 and to Sister Gertrude's Funeral Mass at 10:00 AM. Interment will be in the Medical Mission Cemetery.

Dear family and friends I send my deepest condolences! What a woman! What a life she led! I am so proud to have known her and to be a part of the Provost family! I send my love and hugs! Especially to my cousins Bob and Kathy. Love, Lynne(Kolberg) Seppelfrick

The attached photos are added to the memorial of Gertrude Provost, M.M.S. to help share their legacy.

Thank you for sharing your memory of Gertrude