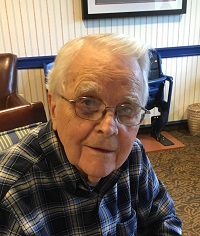 Paul E. Boucher, age 89, of Gwynedd Estates in Lower Gwynedd, PA, died peacefully on Wednesday, April 15, 2020, with his beloved wife of 57 years, Ellen (nee Langan) Boucher at his side.

Paul attended a one-room schoolhouse in Highgate Center, VT. He was a graduate of Saint Michael's College and earned his Master's Degree in Economics from the University of Vermont.

He served from 1953 to 1957 in the United States Airforce as a weather forecaster during the Korean War.

Paul was an Actuary for Prudential Insurance for 33 years before retiring in 1990.

Paul was a member of St. Alphonsus Parish, Maple Glen, PA. He enjoyed a good game of duplicate bridge. He was a baseball, hockey, and football fan.

In addition to his devoted wife Ellen, he is survived by his loving children Maryellen Troyer and her husband Mark of Roslyn, PA; Maureen Boucher and her husband Michael Randazzo of Brooklyn, NY; and David Gill-Boucher and his wife Suzy of Whitehall, MD. He is also survived by grandchildren Grace and Gregory Troyer, Genevieve and Owen Randazzo, and Madeline and Alex Gill-Boucher, his sisters Claire Gabso and Yvette (George) Mazuzan, brother Gilbert (Gemma) Boucher, sister-in-law Madeline Boucher, and many nieces and nephews.

Relatives and friends are invited to his Memorial Mass on Saturday, August 8, 2020, at 10:00 AM at St. Louis Church 186 Lamkin Street Highgate Center, VT. Interment will follow in St. Louis Church Cemetery.

I am sorry to hear this. You have my condolences. Steve Rosenthal, UDHS 86

Dear Ellen and children, I so enjoyed Paul's sense of humor and his ready smile. He was a very pleasant addition to our Gwynedd family. Blessings to all, Alyce Klussman

will miss a friend of great character with soft and quiet manner.

We have lost a scrabble champ. Polly and I hope Ellen and her children will be strengthened by the many memories of all of the good days they had together.

The attached photos are added to the memorial of Paul E. Boucher to help share their legacy.

Thank you for sharing your memory of Paul