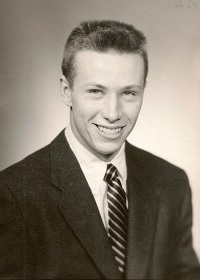 Born in Philadelphia, PA, he was the son of the late G. Howard and Agnes I.Carey (nee Anderson) and brother of the late George H. Carey, Jr.

John earned a Bachelor of Science degree in Commerce and Engineering from Drexel University and was president and owner of the Boiler Erection and Repair Company, Inc. until his retirement in 2014.

John was a Mason and Shriner as well as a member of LuLu Country Club. He was an avid golfer and Eagle's fan. He especially enjoyed spending time with his family and his friend, Lucille Walker.

John was a good friend of Boilermakers Local 28 NJ. I have many great memories of John and Betty. John was an honorable good person. My deepest condolences to his family. May he Rest In Peace knowing he had a life well lived.

John was a great friend to the International Brotherhood of Boilermakers Boilermakers Local 13 as well as myself Joe Murray and my family we had many good times together Lake George Las Vegas, Buffalo ,it was always such a treat to be invited to a Flyers game or an Eagles game with he and Betty such great fun...Joe and Sharon Murray and family

The attached photos are added to the memorial of John H. Carey, Sr. to help share their legacy.

Thank you for sharing your memory of John