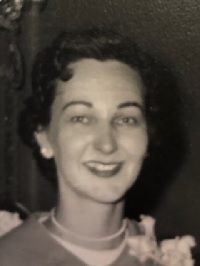 Irene S. Allen, 93, a resident of Ambler, PA died May 12th at Spring House Estates in Lower Gwynedd from complications of dementia and COVID-19.

She was the daughter of Mary and Bernard Sklaris who immigrated from Lithuania in 1916 and married in October 1918 in a small ceremony at the priest's home. This year was impacted by the Spanish Flu pandemic, with similar social distancing practices that are being experienced in 2020.

Irene grew up in Mahanoy City and moved to Hazelton where she attended Hazelton Senior High School and was a majorette. Her family moved during her senior year to the Germantown section of Philadelphia and she graduated from Little Flower High School in 1944. Living there, she met her husband, William Watson Allen Jr., who she married in 1957. Irene raised five children moving from Berwyn, to Birmingham and Bloomfield Hills Michigan and then back to her husband's hometown of Ambler. Irene worked in financial institutions throughout her career and finally retired from Honeywell Credit Union when she was 87 years old.
Her husband died in 2006. Her sister, Marie Bauers, Hilltown, died in 2002. Another sister, June McIntyre, of Spring House Estates, died on Easter Sunday 2020. Her brother, Bernard died in his infancy. Irene is survived by her five children, Betsy Scarcelli (Albert), Vicki DeSalvo (Nicholas), Sandy Taylor (Arthur), Billy Allen (Michele), Jamie Allen (Karen Hogan); grandchildren Elizabeth, Madeline, Amanda, Sarah, Fredrick, Alexandra, Billy, Samantha, Emily, Brittany; and great grandchildren Naomi, Cameron, Mariella, Michael, James, Billy, Lilly, and Corey. Also, 8 nieces and nephews and numerous great- and great-great nieces and nephews.

Irene loved to spend time with her children and their families, especially at their homes and dining out. She would always enjoy going to the beach, dipping her toes in the sand and trying her luck in the casino. Irene was an avid reader and easily adapted to using a Kindle and iPad. Irene played bridge, canasta, mahjong and more recently, Rummy 500 with anyone who would test her skills. She also played solitaire on her iPad and sometimes ventured into Facebook to see pictures of her family. When anyone visited Irene she would ask "Where are we going?" as she was always interested in going out to lunch or on an adventure.

Services will be private and a memorial mass will be scheduled when possible. In lieu of flowers, donations in her honor can be made to Mattie N. Dixon's Community Cupboard in Ambler PO Box 367 Ambler, PA 19002 www.community-cupboard.org.


Photos and Tributes may be shared at www.UrbanFuneralHome.com

The services for Irene have not yet been added. Please sign up below to be notified when the services are ready.

The attached photos are added to the memorial of Irene S. Allen to help share their legacy.

Thank you for sharing your memory of Irene