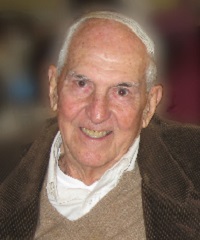 Tiny was a graduate of Ambler High School Class of 1945 and entered The US Army to serve in Germany during World War II. He received the European African Middle Eastern Campaign Medal. He re-enlisted and served again in Korea, receiving the Korean Occupation Medal before his Honorable Discharge in 1951. He then attended Pierce Business School and joined the family business at G. M. Deck & Sons Hardware in Ambler.

He was very civic-minded and served as a charter member of the Ambler Jaycees, Past President of the Ambler Chamber of Commerce, was a member of American Legion Post # 125 and the William Boulton Post # 10 in Fort Washington. His business affiliations were with True Value, Servi Star .... and all things Hardware. Tiny was never without a pocket knife or stick ruler when he was in the store.

Tiny and Ginny are long time members of St. John's Lutheran Church in Centre Square. Tiny was a Philadelphia Sports Fan who enjoyed many a Phillies game with his Grandchildren. He enjoyed to hunt, fish, and snowmobile in winter.

Tiny was the beloved husband of 70 years of Virginia "Ginny" (nee McPherson) Deck. He is the devoted father of Tyler Deck and his wife Sherri of Ambler, and Tim Deck of North Wales. He is the loving Grandfather of Jacquelyn Adometto (Michael), Christina Harrigan (Joe), Lindsey Thornton (Joey), Steven Deck, and Jonathan Deck (Danielle) and and Great Grandfather of Shayne, Mariella, Joseph, Chelsea, Maeve, and Sienna.

Service and Interment in Whitemarsh Memorial Park are Private.

Remembrances in his name to William Boulton Dixon, American Legion Post No. 10, 493 S Bethlehem Pike Fort Washington, PA 19034 would be appreciated by the family.

Photos and tributes may be shared at WWW.UrbanFuneralHome.com

Our thoughts and prayers are with the Deck Family at this time. May you find peace and comfort that he is in a happier place! Frank and Beverly Salemno

May God Bless him and his family, remember him fondly when I lived in Ambler many years ago as a teenager and went to school with Nancy Deck.

He was always kind and took his time to help you in the store! Thank God for the loving Deck family! Mary and Jean Diette

There is no place like Deck's Hardware. There was no one like Tiny Deck and his boys who have kept the tradition going. Blessings to all the family. Ron Lutz

Just a wonderful man that I always enjoyed my trips to Decks, and my many conversations, with Tiny,and his sons Tim,and Tyler,and his knowledge of everything,you ever needed,He was a very special person, and will truly be missed bye people who knew him!

The services for Dawson have not yet been added. Please sign up below to be notified when the services are ready.

The attached photos are added to the memorial of Dawson "Tiny" Deck to help share their legacy.

Thank you for sharing your memory of Dawson