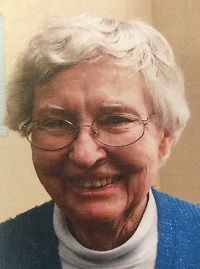 Sister Patrice McSweeney was born on May 21, 1932 in Barranca Bermeja, Colombia to her parents, William and Grace McSweeney. When she was seven, her father's job took the family to Venezuela, and Sister Patrice fell in love with her new country. As a youth she left for schooling in the United States, first to Albany, New York and then to Florida. She graduated from high school in 1950 from Academy of the Holy Names in Tampa, FL.

When Sister Patrice learned of the Medical Mission Sisters (MMS) in high school she knew she wanted to join. Her father advised her to get her medical training first, and she earned her R.N. from St. Peter's Hospital School of Nursing in Albany, NY in 1953. She joined MMS in 1954 and made her Final Profession in 1962. A favorite story of Sister Patrice's is when Mother Anna Dengel asked her if there was any reason she would not want to go to Venezuela for her mission assignment. "Cartwheels in my heart," was Sister Patrice's response. She moved to Maracaibo, Venezuela in 1957.

Working at a company hospital owned by a large oil company in Maracaibo, Sister Patrice was troubled at the lack of outreach and care for the poor in the community. Although company owned, the hospital was run by MMS who were determined to see the poor in the hospital. They mixed the people who could pay with the people who could not pay. Sister Patrice shared, "Nobody could tell, unless they knew the code from the charts, who was who. That was the beauty of it." She believed that their practice of integrating those who could not pay with those who could changed practices in other hospitals in Venezuela.

After nine years in Maracaibo, Sister Patrice returned to the States to earn her B.S.N. from the University of Pennsylvania in 1970. She then moved to Rio Piedras, Puerto Rico to obtain a Master of Public Health from Recinto Ciencias Medicas in 1972, and her midwifery certificate the following year from Eseuela de Enfermecia Obstetrica in Rio Piedras.

Moving back to Venezuela, Sister Patrice worked at a public health center in Maracaibo until 1976, then moved to Caripe, a small agricultural town where she participated in a newly forming Christian community. From 1980- 1982 she cared for a family whose mother was suffering from mental illness, and then she moved to Barquisimeto. Sister began getting to know the 'hidden' children, the children with disabilities. After creating a bussing project that took the children with hearing impairment to school, Sister Patrice got to work on providing similar support for children with developmental and intellectual disabilities. As she tended to the children and their families, their attitude towards disability was transformed and the children, no longer 'hidden,' were able to access supportive services.

Sister Patrice became interested in a group of students in Santo Domingo who were particularly concerned with the environment and had asked for support. She lived in Santo Domingo and Barquisimeto, doing parish work and accompanying young people from 1986 until March of 1999. Sister Patrice was devoted to the people of Venezuela and after repatriating to the U.S. she continued to nourish the relationships she had built while living there. Upon her return to Philadelphia, Sister Patrice was a parish worker and served on the MMS North American Justice Committee. She worked in the MMS Mission Development Center up until staff began working remotely in March 2020, due to the Coronavirus.

Sister Patrice was a talented writer and artist, exemplified in her poetry and handiwork on cards and letters. She was cherished for her gentle and caring nature and appreciated for her keen sense of wit which lightened a moment without detracting from the seriousness of a situation. She was unassuming, saying just a few months ago, "I didn't want to be in leadership; I like the messy, nitty gritty. I like the bottom layer. It's hard to be constrained now [referring to her limitations due to age and health], but I had my chance and I had a ball."

Sister Patrice's healing presence and generosity of heart will be greatly missed.

The services for Patrice have not yet been added. Please sign up below to be notified when the services are ready.

The attached photos are added to the memorial of Patrice McSweeney, M.M.S. to help share their legacy.

Thank you for sharing your memory of Patrice