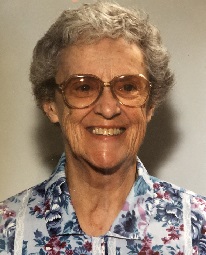 Sister Jacinta (Mary Florence) Conlon was born to her parents Florence and Charles Conlon on August 1, 1923 in St. John, New Brunswick, Canada. She died from Covid-19 on June 9, 2020 at the age of 96.

Sister Jacinta graduated from Moncton High School, then earned her R.N. at St. Michael's Hospital in Toronto, Canada in 1956. She was working at St. Mary's Hospital in Montreal when she learned of the Medical Mission Sisters (MMS). She entered MMS in October 1958 and made her Final Vows in October 1966.

India was Sister Jacinta's first mission assignment. She described leaving New York in a blinding snowstorm and saying she had died and gone to heaven when she arrived to 80 degree weather and beautiful flowers in Mandar, India. Sister Jacinta was in this country for a total of 13 years, working as a nurse-midwife and staff nurse in MMS's Holy Family Hospitals in Mandar, Bombay and New Delhi. She received her midwifery certificate from Holy Family Hospital, Bombay in 1966. She loved caring for the babies who were born in the hospitals. "Operating by way of the jeep's headlights when the power went out and placing the 'lil babies in orange crates for bedding," are just two of the familiar stories Sister Jacinta easily recalled when describing her time in mission there.

In 1976 Sister Jacinta returned to Canada and worked with the elderly population for three years. Providing nursing care at St. Patrick's Home in Ottawa and Grey Nuns Nursing Home in Ontario awakened Sr. Jacinta's passion for caring for the elderly; this is the population she worked with for the remainder of her professional career.

Sister Jacinta was thrilled to be asked to care for MMS' Foundress Mother Anna Dengel in the last year of Mother Dengel's life. She traveled to Rome in 1979 and spent a year with Mother Dengel - Sr. Jacinta described it as the highlight of her MMS life. She treasured her time there and loved to tell this story: "One morning when I was with her, the village church bells rang out, as they did every day. I kept bathing Mother and talking to her at the same time, and she kept staring at me. At the time she hadn't been talking for five or six months, not talking at all. I said to her, "Oh, if you could only hear these bells, Mother, they're so pretty." Suddenly Mother Dengel said, "I hear them every morning."

After Mother Dengel passed, Sister Jacinta returned to the Grey Nuns Nursing Home in Canada. She worked there for a few months, before moving to Philadelphia to care for elderly MMS living on the Fox Chase campus. She spent the fall of 1982 in St. Mary of the Woods in Terra Haute, IN to earn her certificate in gerontology. She returned to Philadelphia until 1983 when she moved to Columbia, SC to explore work possibilities and help senior citizens through the Council on Aging. Moving back to Philadelphia in 1984, she continued to provide nursing care for elderly MMS Sisters.

Florida was home for Sister Jacinta from 1986 - 2008. She worked as a respite provider for the home-bound elderly, as a volunteer in hospice care and visited homebound parishioners. During this time, she lived in Tampa, Holiday and St. Petersburg. She reported at one point that she had seven clients on her caseload who "keep me busy and out of mischief!"

Sister Jacinta started working in the MMS Mission Development Center upon her return to Philadelphia and was a steady, faithful presence for 11 years. She was deeply appreciated for her quick wit, strong will, her mischievous grin and the twinkle in her bright blue eyes. In between her hours of working diligently, she loved to tell stories of her time in the missions and was unapologetic about her deep love for chocolate cake and sharp cheddar cheese.

Family was very important to Sister Jacinta; she thoroughly enjoyed the updates from her nieces, nephews, grandnieces and grandnephews. She delighted in keeping abreast of their schooling, travels and work; one of her nieces was able to be with her through Facetime shortly before she passed.

Having coped with debilitating arthritis, COPD, and severe hearing loss over many years, Sister Jacinta was a strong woman. Though her hearing loss was profound, she adapted by learning to read lips well. As her mother (also hearing impaired) once told her, those who cannot hear tell the funniest stories - and she did, intentional and unintentional.

Sister Jacinta was fiercely independent with a clear mind on how she liked things; she was funny and optimistic, compassionate and dedicated. She is greatly missed. May she rest in peace. Remembrances in her name to the Medical Mission Sisters, 8400 Pine Road, Philadelphia, PA 19111 would be appreciated.

The services for Jacinta have not yet been added. Please sign up below to be notified when the services are ready.

The attached photos are added to the memorial of Jacinta Conlon, M.M.S. to help share their legacy.

Thank you for sharing your memory of Jacinta