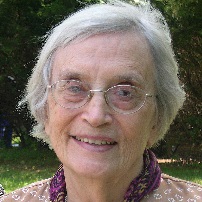 In 1952 Sister Julia received a B.A. from Trinity College in Washington, DC and immediately began studies at Catholic University, also in Washington, D.C. She graduated with a master's degree in Library Science in 1953, after which she worked in the MMS library and in publicity in Philadelphia until 1956.
From Philadelphia Sister Julia traveled to Holy Family Hospital, Rawalpindi, Pakistan where she worked in the admissions office
e for four and a half years. She then moved to the Philippines where she served in the novitiate office. She left the Philippines after one year due to health reasons.
For the next several years Sister Julia worked as a librarian in MMS's Philadelphia office, and in Washington, D.C., and as a staff member at St. Vincent's Hospital and Child Study Center in Philadelphia.

In 1972 Sister Julia received an M.S.W. from St. Louis University and spent a year working as a social worker for children with special needs. She was deeply frustrated by the racial and economic biases she saw in the public school system and yearned for a better experience for the students she supported. She wrote, "I am awed and grateful for the openness and trust of children and when I talk with an adult, I try to discern and love in him the lost child." From New Orleans she moved to Las Vegas, New Mexico. She worked at the New Mexico State Hospital and Meadows Hospital from 1973 - 1975.

Volunteer work became Sister Julia's ministry after her official "retirement." She served in New Orleans teaching high school religion to pregnant girls, helping women without homes find work and visiting women in prison for three years. In 1999 she moved to Tucson, AZ where she volunteered in the Catholic Worker soup kitchen, visited the elderly in an assisted living home and was a court-appointed special advocate for a child in foster care. She said of her experience serving food at Casa Maria, the soup kitchen, "The first time I went there, I knew I was in the right space...my job was whatever was needed...it was so rewarding to see hungry people fed." She taught adult education and noted that her most successful and well attended class had 60 students; it was a class she taught on Islam right after 9/11. She was involved with Amnesty International and described a memorial service for all those who died in the desert while crossing the border. In her last year in Tucson she volunteered at the State Penitentiary as a chaplain.

Sister Julia moved to St. Petersburg, FL in 2005 where she served at Daystar, a Catholic social service place for emergency help, in the public school system, and was a consumer advocate for residents in long term care facilities. She also visited the county jail which housed 2000 inmates.

In 2007, at age 79, Sister Julia returned for the last time to Philadelphia. She was involved with Pax Christi and Amnesty International. She wrote, "You have to be public about social justice. It's not enough to pray and have something in your mind. You have to have public action." She worked in prison ministry and taught citizenship at IHM Literacy Center.

Never domineering or overbearing, Sister Julia was frank, logical and unafraid to speak her mind. She had little patience for inefficient bureaucracy and wrote eloquently about her opinions on structure, legislation, and governance. She was skilled at seeing how the pieces are part of a whole, and talented in articulating her perspective in writing. In a questionnaire developed by MMS leadership in 2006, she was asked to describe lessons that helped her see things differently. She wrote, "I cannot answer this because each experience adds to and alters perceptions. Basic lesson, however, is the goodness of God and how we are surprised by God's love. I have learned to look for God in people, sometimes just to ask God's blessing on them. Other times, people are God's blessing to me." She went on to note where she believed the questionnaire was redundant or not broad enough in its scope.

Sister Julia had been living at the Medical Mission Sisters headquarters in Fox Chase, Philadelphia until March 2018 when she moved to Lafayette Redeemer. She contracted Covid-19 and was placed on hospice care June 12, 2020. A private burial will be held June 26, 2020.

I taught with Julia at AR State. She was such a blessing in her dedication to all. Her dedication to her ministry was a joy to behold. Always humble but frank I found her a source of comfort and strength. She will always be in my memory. Emmett A. Presley, Asst. Prof. of Social Work.

I had one of the most wonderful days of my life when I met Sister Julia at the park here in
Saint Petersburg. I have the most pleasant memories of Julia. She was the most compasionate, thoughtful, and considerate person that I have ever met and a very very good friend. RIP Julia. God Bless.
I

Sister Julia was a wonderful and dear friend to my mother, Lois Slovin in St. Petersburg, Florida. They made many acquaintances together, lovely walks in the park, saw inspirational movies and had impactful discussions together. My mother has missed her greatly since she moved to PA. She will always we remembered fondly.

The services for Julia have not yet been added. Please sign up below to be notified when the services are ready.

The attached photos are added to the memorial of Julia Mae Burkart, M.M.S. to help share their legacy.