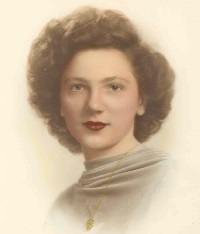 Born in Visolaje, Czechoslovakia, she was the daughter of the late Michael and Mary (Baninec) Martinka. She and her parents immigrated to the United States, when she was a small child, where they settled down in Northeast, Philadelphia.

Anastasia was class Valedictorian and a 1948 graduate of Kensington High School in Philadelphia. She received her Associate Degree in Business from Temple University. She worked as a keypunch operator and instructor for several companies, including IBM in New York, Aramco, in Saudi Arabia, and General Electric, in Philadelphia. When she wasn't working, Anastasia enjoyed traveling and was a talented artist that enjoyed sketching and painting.

After marrying in 1963, she and her husband, George, settled down in New Britain, PA. Mrs. Barker was a parishioner at St. Jude Church and Shrine in Chalfont.

Anastasia, a beloved wife and mother, was preceded in death by her husband George L. Barker Jr. in 2005. She is survived by her daughter Maria Harvey and her husband, Troy, and loving grandchildren, James and Amber of Grovetown, GA. Daughter Georgeanna McManus and her children Scotty and Collin. Anastasia is the sister of Michael Martinka and his wife, Carol, of Springfield, VA, and Eleanor Schaefer and her husband, Dieter, of Green Valley, AZ. She is also survived by nephew Michael Martinka, and his family, and niece Sandy Preaux, and her family, both from VA. Anastasia also has family residing in PA, as well as Europe.

Funeral Services were held privately by the family. Interment was at St. John Neumann Cemetery in Chalfont.

There are no events scheduled.

The attached photos are added to the memorial of Anastasia M. Barker to help share their legacy.

Sign up to get our FREE Hospice Resource immediately in your inbox!

Learn about funeral styles + unique options to have a personalized service or celebration.