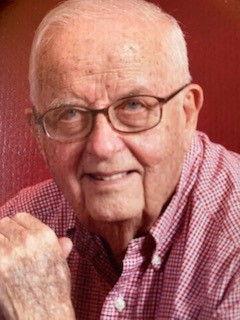 James Edward "Jim" Frick
1920-2020
James Edward "Jim" Frick passed peacefully at the age of 100 in Ambler PA on November 18th,
2020.
Jim made the best decision of his life in 1959 marrying Martha Jean Diersing in Louisville, KY.
They moved to the Ambler area where they shared 49 wonderful years until Martha's death in
2008. They loved spending time with family (especially their grandchildren), socializing with
friends, and travelling.

Jim was known for his unbending optimism, great story-telling, sense of humor, and love of a
good bourbon old fashioned. He was an avid sports fan, fisherman, golfer and card player, but
his real joy came from spending time with his family and good friends.

Jim was born on April 19, 1920 in Glenside PA--the only child of Margaret (Loftus) and Frederick
Frick of Glenside, PA. Jim graduated from St Joseph's Preparatory School (Philadelphia) in
1938 and graduated from The University of Notre Dame in 1942. Jim proudly served in both the
Atlantic and Pacific fleets of the US Navy from 1942 to 1945 attaining the rank of Lieutenant
Commander. He is believed to have been the last surviving Navy Lieutenant Commander from
World War II. Jim was extraordinarily proud of his service to our country and spoke glowingly
about his days in the Navy.

After his honorable discharge from the Navy, Jim graduated from the University of Pennsylvania
School of Law. Jim was a corporate lawyer and worked many years with the Reading Railroad.
After working with both Amtrak and Conrail, he returned to the Reading Railroad in the late
1970s as a member of its reorganization team. He retired in 1984.

He was adored and called "Jimbo" by his 10 grandchildren: Amanda, Brendan, Colin,
Francesco, Christopher, Penelope, Isolde, Maddie, Zaccaria and Lily.

A funeral mass and graveside services are private due to COVID precautions. The funeral
mass will be held at St Anthony's Church in Ambler, PA.

The services for James have not yet been added. Please sign up below to be notified when the services are ready.

The attached photos are added to the memorial of James E. Frick to help share their legacy.

Thank you for sharing your memory of James