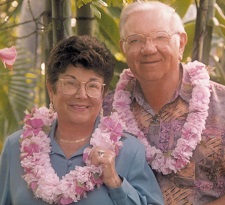 Dr. George E. Ries, formerly of Lafayette Hill, PA, and Ocean City, NJ, peacefully went home to his God July 25, 2020. He was 97 years old and passed away at the Artman Home in Ambler, PA.

Born in Philadelphia, he was the eldest son of George P. and Helen (nee Kurtz) Ries.

As a young boy, the family moved to Maple Shade, NJ, where he became active in Boy Scouts earning the rank of Eagle. He graduated from Moorestown H.S. in 1940. He completed his premed studies at Gettysburg College before earning his DDS from Temple University School of Dentistry in February, 1946.

Dr. Ries served his country as a Captain in the U. S. Army Dental Corps from 1946 to 1948, primarily stationed at the Oakland, CA, Army Base attending to GI's returned from the Pacific theatre in World War II.

After discharge, Dr. Ries opened a practice in his home in the Mt. Airy section of Philadelphia. When the practice grew, he moved it to Chestnut Hill.

Upon graduation, Dr. Ries was appointed a full time Instructor of Prosthetic Dentistry at his alma mater. Apart from a leave of absence for military service, he was associated with the Temple University School of Dentistry in various full time and part time teaching capacities for 42 years. He retired as Senior Professor of Orofacial Prosthetics and Fixed Prosthodontics in 1988. Upon retirement, the President of Temple University appointed him Professor Emeritus.

At different points in his career, Dr. Ries served on the staffs of St. Christopher's Hospital for Children, Temple University Hospital, Pennsylvania School for the Deaf, Lutheran Home for Orphans and Aged, and American Oncologic Hospital.

Professor Ries presented many lectures and clinics to his colleagues throughout the nation and the world. He was published in several professional journals. He was a Fellow of the International College of Dentists, a Fellow of The Academy of General Dentistry, Grand Master and member of Psi Omega, President and member of Omicron Kappa Upsilon and other professional societies and served on the Board of Governors of the Philadelphia County Dental Society.

Dr. and Mrs. Ries loved to entertain their family, friends, neighbors, and colleagues; and their themed parties were legendary! They were also avid travelers and cruisers. They visited most states in the U.S.A. (their favorite being Hawaii) and at least 25 foreign countries, including the former U.S.S.R. where he presented a series of lectures.

Jane Beatrice Ries (nee Leiser) left this world to join her husband of 73 years, Dr. George E. Ries, in Heaven on January 20, 2021. Sadly, she tested positive for COVID on New Year's Day, one day before she was to be vaccinated, and ultimately succumbed to the virus.

Jane was born at her parents' home above the family bakery in West Philadelphia on July 27, 1926. She graduated from West Philadelphia High School in 1944, at which time she was presented the coveted "Gift of Roses." After high school she went to Hahnemann Hospital where she trained to be a medical technician, a profession of which she was very proud.

She met the love of her life on the beach in Ocean City, New Jersey; and in April, 1947, she married Captain Ries of the U.S. Army Dental Corps. They made their first home at the Oakland Army Base in California.

Jane was a woman with boundless energy and creativity. She was a super Mom and loving grandmother, volunteer, gourmet cook, amazing seamstress, and legendary party hostess.

A joint celebration of Dr. and Mrs. Ries' lives will be held on Sunday, June 27, 2021 at 2:00 PM. Relatives and friends are invited to call after 1:00 PM in Roland's Glen Outdoor Chapel of the Upper Dublin Lutheran Church, 411 Susquehanna Road, Ambler, PA 19002. In the event of inclement weather, the service will move indoors. Dr. and Mrs. Ries' ashes will be mixed and scattered in their "Happy Places" of Ocean City, NJ and Kona, Hawaii.

Remembrances to the Artman COVID Relief Fund which benefits the hero staff at Artman Lutheran Home, 250 Bethlehem Pike, Ambler, PA 19002, or https://www.artmanhome.org/giving would be appreciated by the family.

The attached photos are added to the memorial of George and Jane Ries to help share their legacy.

Please help memorize George and Jane Ries by recording your attendance below.

Thank you for sharing your memory of George and Jane