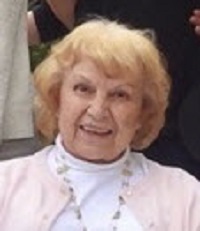 Teresa B. Hoffman, a beloved mother, grandmother, and great grandmother, passed away peacefully on Saturday, November 6, 2021 at the age of 94.

Known as Terri to her friends and family, or Grammy to her grandchildren, Teresa was born in Harrisburg, PA. She was the daughter of the late Gustav and Mary Kasparek Belsak. She was a graduate of Bishop McDevitt High School in Harrisburg, PA, and later earned a secretarial certification. After graduating, Terri worked as a secretary before meeting her husband of 53 years, Robert A. Hoffman Jr. She served as an administrative assistant for the president of Standard Pressed Steel in Jenkintown, PA, before she stepped aside to focus on raising her three sons and one daughter. Terri later returned to the work force and served as an HR Administrator with the Wissahickon School District until her retirement in 1997.

Terri lived with Bob and her children in Ambler, PA, where she was an active member at St. Anthony of Padua Parish. She enjoyed participating in the various Bridge social groups in the parish. Terri was also part of the parish's Flower Guild for over 15 years. She moved to the Dock Woods Community in Lansdale, PA, in 2011 where she was quickly welcomed and received loving care during her residency.

Terri was preceded in death by her loving husband, Bob, in 2006 and her dear daughter, Maryanne Mogensen, in April 2021. She is survived by her devoted sons and their wives; Robert and Nancy Hoffman III of Murfreesboro, TN; Patrick and Stacey Hoffman Sr. of Audubon, PA; Chris and Krissy Hoffman of Annapolis, MD; and her son-in-law John Mogensen of Montgomeryville, PA. Terri was blessed with 10 grandchildren: Michael, Heather, Brian, Katie, Paul, Meghan, Patrick Jr., Colin, Kelly, and Sean, and 7 great-grandchildren: Evan, Andrew, Ryan, Aralyn, Orion, Peter, and Emma.

Relatives and friends are invited to call after 9:30 AM on Saturday, January 8, 2022 at St. Anthony of Padua Catholic Church, 259 Forest Ave. Ambler, PA 19002. Words of Remembrance will begin at 10:45 AM followed by the Funeral Mass at 11:00 AM, with the Rev. Msgr. Stephen P. McHenry as Celebrant. Interment will follow at St. John Neumann Catholic Cemetery.

To send flowers to the family or plant a memorial tree in memory of Teresa B. Hoffman, please visit our Tribute Store

The attached photos are added to the memorial of Teresa B. Hoffman to help share their legacy.

Please help memorize Teresa B. Hoffman by recording your attendance below.

Grieving from a Distance Article

Learn ways to show love and support to those who need it, and also begin the grieving process.